Ulaanbaatar, formerly anglicised as Ulan Bator /ˌuːlɑːnˈbɑːtər/ (Mongolian: Улаанбаатар, literally “Red Hero”), is the capital and largest city of Mongolia. The city is not part of any aimag (province), and its population as of 2014 was over 1.3 million, almost half of the country’s population. The municipality is in north central Mongolia at an elevation of about 1,300 meters (4,300 ft) in a valley on the Tuul River. It is the country’s cultural, industrial and financial heart, the centre of Mongolia’s road network and connected by rail to both the Trans-Siberian Railway in Russia and the Chinese railway system.

The city was founded in 1639 as a nomadic Buddhist monastic centre. It settled permanently at its present location, the junction of the Tuul and Selbe rivers, in 1778. Before then, it changed location 28 times, each new location being chosen ceremonially. In the twentieth century, Ulaanbaatar grew into a major manufacturing center. Ulaanbaatar is a member of the Asian Network of Major Cities 21. The city’s official website lists Moscow, Hohhot, Seoul, Sapporo and Denver as sister cities.

Human habitation at the site of Ulaanbaatar dates from the Lower Paleolithic, with a number of sites on Bogd Khan, Buyant-Ukhaa and Songinokhairkhan mountains, revealing tools which date from 300,000 years ago to 40,000–12,000 years ago. These Upper Paleolithic people hunted mammoth and woolly rhinoceros, the bones of which are found abundantly around Ulaanbaatar.

A number of Xiongnu-era royal tombs have been discovered around Ulaanbaatar, including the tombs of Belkh Gorge near Dambadarjaalin monastery and tombs of Songinokhairkhan. Located on the banks of the Tuul River, Ulaanbaatar has been well within the sphere of Turco-Mongol nomadic empires throughout history.

Wang Khan, Toghrul of the Keraites, a Nestorian Christian monarch whom Marco Polo identified as the legendary Prester John, is said to have had his palace here (the Black Forest of the Tuul River) and forbade hunting in the holy mountain Bogd Uul. The palace is said to be where Genghis Khan stayed with Yesui Khatun before attacking the Tangut in 1226.

Founded in 1639 as a yurt monastery, Ulaanbaatar, originally Örgöö (palace-yurt), was first located at Lake Shireet Tsagaan nuur (75 kilometres (47 miles) directly east of the imperial capital Karakorum) in what is now Burd sum, Övörkhangai, around 230 kilometres (143 miles) south-west from the present site of Ulaanbaatar, and was intended by the Mongol nobles to be the seat of Zanabazar, the first Jebtsundamba Khutughtu. Zanabazar returned to Mongolia from Tibet in 1651, and founded seven aimags (monastic departments) in Urga, later establishing four more.

As a mobile monastery-town, it was often moved to various places along the Selenge, Orkhon and Tuul rivers, as supply and other needs would demand. During the Dzungar wars of the late 17th century, it was even moved to Inner Mongolia. As the city grew, it moved less and less.

In 1778, the city moved from Khui Mandal and settled for good at its current location, near the confluence of the Selbe and Tuul rivers, and beneath Bogd Khan Uul, at that time also on the caravan route from Beijing to Kyakhta.

One of the earliest Western mentions of Urga is the account of the Scottish traveller John Bell in 1721:

What they call the Urga is the court, or the place where the prince (Tusheet Khan) and high priest (Bogd Jebtsundamba Khutugtu) reside, who are always encamped at no great distance from one another. They have several thousand tents about them, which are removed from time to time. The Urga is much frequented by merchants from China and Russia, and other places.

By Zanabazar’s death in 1723, Urga was the Mongolia’s preeminent monastery in terms of religious authority. A council of seven of the highest-ranking lamas (Khamba Nomon Khan, Ded Khambaand five Tsorj) made most of the city’s religious decisions. It had also become Outer Mongolia’s commercial center. From 1733 to 1778, Urga moved in the vicinity of its present location. In 1754, the Erdene Shanzodba Yam of Urga was given authority to supervise the administrative affairs of the Bogd’s subjects. It also served as the city’s chief judicial court. In 1758, the Qianlong Emperor appointed the Khalkha Vice General Sanzaidorj as the first Mongol amban of Urga with full authority to “oversee the Khuree and administer well all the Khutugtu’s subjects”.

In 1761, a second amban was appointed for the same purpose, a Manchu one. A quarter-century later, in 1786, a decree issued in Peking gave right to the Urga ambans to decide the administrative affairs of Tusheet Khan and Setsen Khan territories. With this, Urga became the highest civil authority in the country. Based on Urga’s Mongol governor Sanzaidorj’s petition, the Qianlong Emperor officially recognized an annual ceremony on Bogd Khan Mountain in 1778 and provided the annual imperial donations. The city was the seat of the Jebtsundamba Khutugtus, two Qing ambans, and a Chinese trade town grew “four trees” or 4.24 km (2.63 mi) east of the city center at the confluence of the Uliastai and Tuul rivers. 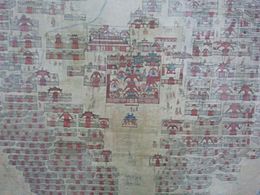 Detail of 19th-century painting of Urga (Ulaanbaatar): in the centre the movable square temple of Bat Tsagaan, built in 1654, besides numerous other temples

By 1778, Urga may have had as many as ten thousand monks, who were regulated by a monastic rule, Internal Rule of the Grand Monastery or Yeke Kuriyen-u Doto’adu Durem. For example, in 1797 a decree of the 4th Jebtsundamba forbade “singing, playing with archery, myagman, chess, usury and smoking”). Executions were forbidden where the holy temples of the Bogd Jebtsundama could be seen, so capital punishment took place away from the city.

In 1839, the 5th Bogd Jebtsundamba moved his residence to Gandan Hill, an elevated position to the west of the Baruun Damnuurchin markets. Part of the city was moved to nearby Tolgoit. In 1855, the part of the camp that moved to Tolgoit was brought back to its 1778 location, and the 7th Bogd Jebtsundamba returned to the Zuun Khuree. The Gandan Monastery flourished as a center of philosophical studies.

The Russian Consulate of Urga (Ulaanbaatar) and the Holy Trinity Church, both built in 1863

Urga and the Kyakhta trade

Following the Treaty of Kyakhta in 1727, Urga (Ulaanbaatar) was a major point of the Kyakhta trade between Russia and China – mostly Siberian furs for Chinese cloth and later tea. The route ran south to Urga, southeast across the Gobi Desert to Kalgan, and southeast over the mountains to Peking. Urga was also a collection point for goods coming from further west. These were either sent to China or shipped north to Russia via Kyakhta, because of legal restrictions and the lack of good trade routes to the west.

By 1908, there was a Russian quarter with a few hundred merchants and a Russian club and informal Russian mayor. East of the main town was the Russian consulate built in 1863 with an Orthodox church, post office and 20 Cossack guards. It was fortified in 1900 and briefly occupied by troops during the Boxer Rebellion. There was a telegraph line north to Kyakhta and southeast to Kalgan and weekly postal service along these routes.

Beyond the Russian consulate was the Chinese trading post called Maimaicheng, and nearby the palace of the Manchu viceroy. With the growth of Western trade at the Chinese ports the tea trade to Russia declined, some Chinese merchants left and wool became the main export. Manufactured goods still came from Russia, but most were now brought from Kalgan by caravan. The annual trade was estimated at 25 million rubles, nine-tenths in Chinese hands and one-tenth in Russian.